A change from a competitors traditional oval bottom trawldoors to the type 15 VF, has given the following comments: “Atlantic Viking of Aalesund in Norway is catching more cod by shifting to specially designed multi purpose flying doors from Thyborøn Trawldoor.”

Using 8,5 square metre specially designed VF 15 flying doors the skipper and owner of the ”Atlantic Viking”, Jarle Valderhaug, has experienced quite a lot of advantages.

“I have shifted to multi purpose flying doors for bottom trawling instead of just bottom doors. The VF 15 doors have been reinforced with Hardox knives bolted on the frontside of the keel. This means that I can choose to use the doors flying in the water or lower them to the bottom when ever there is a need for that” says Jarle Valderhaug.

Using two large Bacalao 738# bottom trawl of Aalesund the 8,5 square metre doors sounds somewhat small, but the effect is anything but that.

“The double trawl are quite big but the multipurpose trawldoors has proved to add great stability when trawling. The spread is very convincing and so is the distance between the doors. They do not fasten on the bottom very often and therefore we see less damages on the nets. It all adds up to an increase in our catchrate”, says Jarle.

Using relatively small flying doors the ”Atlantic Viking” has the advantage of saving fuel, and Jarle Valderhaug estimates at least 10 per cent less fuel consumption when flying the doors. Using them on the bottom makes no difference from normal bottom doors.

When Jarle Valderhaug looks at the total cost benefit he is very satisfied.

“The price of theese doors is two thirds of bottom doors and the cost of shooing the doors are only a fraction, which means the combination of the multipurpose doors and large double trawl is very good”, says Skipper Jarle Valderhaug. 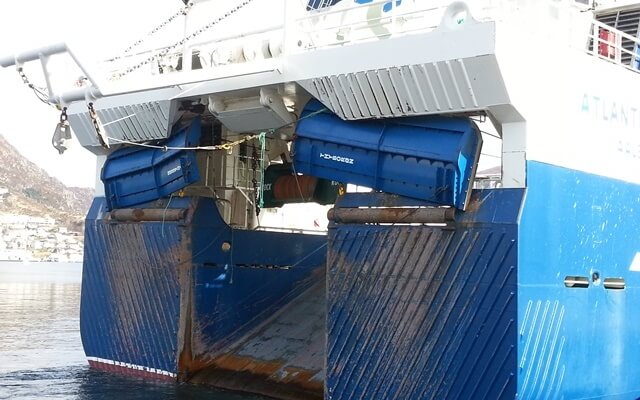