Trawl doors are custom-made steel constructions towed behind fishing vessels. A trawl door is towed in front of a fish catching trawl design. Trawl doors are made in sizes from 1m2 and up to 25m2 with weights from 100 and up to 8.000kg each. The construction and hydrodynamics of the trawl doors are crucial for optimum performance within a curtain fishery. The fishery varies and can be done in different water depths. It can be done demersal or pelagic and in a lot of different weather and sea conditions.

Several adjustment possibilities make the trawl doors steerable and suitable for different kinds of fishing. Adjusting the attachment points of the chain or back straps allow the fisherman to control the trawl doors, making them go deeper or fly higher in the water. Furthermore, it is also possible to control the angle of attack, making the doors spread, while being towed through the water.

The designs are very comparable with an airfoil or airplane wing and therefor the towing speed has a high influence on the performance and how much lift the trawl doors generate. Lift is the hydrodynamical force produced which is produced when the doors are being towed at a curtain angle of attack. The higher angle of attack and speed, the more lift the doors produce.

To catch some species the towing speed is crucial, and we must therefore calculate how much the trawl doors will spread at the towing speed the vessel will operate at when hunting the wanted species.

The electronic development within fisheries worldwide has improved the demands to the suppliers of fishing gear and thereby Thyboron Trawldoor adapt. Using fishing method experts, flume tank specialist and fishermen around the world, Thyboron aims to have the most efficient trawl doors for any given fishing setup either demersal or pelagic.

When developing these hydrodynamic steel constructions that we call trawl doors it is crucial to get the perfect balance of weight while ensuring the waterflow to be as consistent and efficient as possible. Thyboron designs are developed with help from leading experts, tests in wind tunnels, flume tanks and simulation programs.

Every trawl door manufactured by Thyboron Trawldoors is custom made and therefor it varies what material we use in the construction. For some fisheries we use performance steel and for others it is more important with durability and therefor a stronger steel is used. It could be HARDOX, STRENX or WELDOX.

Thyborøn Trawldoors are manufactured by a very experienced, well-educated staff. The combination of the staff’s experience, the best technical equipment and accomplished working procedures are giving a uniform production. The result of this is high-quality products with a minimum of mistakes.

First job is to spread the wire, sweeps and trawl opening. Second job is to keep all the gear on the bottom.

The design of the bottom trawl door is regularly based on how the conditions are in the places where the fishing vessel operates. The most common used bottom trawl doors world-wide is TYPE 11 which is an all-around bottom trawl door, suitable for even the most difficult seabed conditions. The construction of the door will be customized to suit the customer needs, since there is a big difference on whether the doors are about to be used in a rocky area with rock hard seabed or if they are about to be used in soft mud.

A standard bottom door is manufactured in regular steel certified for shipbuilding and if a reinforced model is ordered we manufacture them in high tension steel. The bottom trawl doors are often exposed to a lot of wear and beating when being towed through rocks and stones on the seabed, so to keep the maintenance to a minimum we must construct them as strong as possible.

The shape, the foils, the center of gravity and the towing arrangement makes the TYPE 11 so flexible and ensures an always solid performance. Whether if the doors are used by a Factory trawler or regular fishing vessel, the bottom trawl doors are used with single trawl or twin rig for catching fish species such as Cod, Haddock, Flatfish, Monkfish, turbot, hake, plaice, red fish etc. they are also used to catch seafood such as different squid species, prawns, shrimps, and lobster. 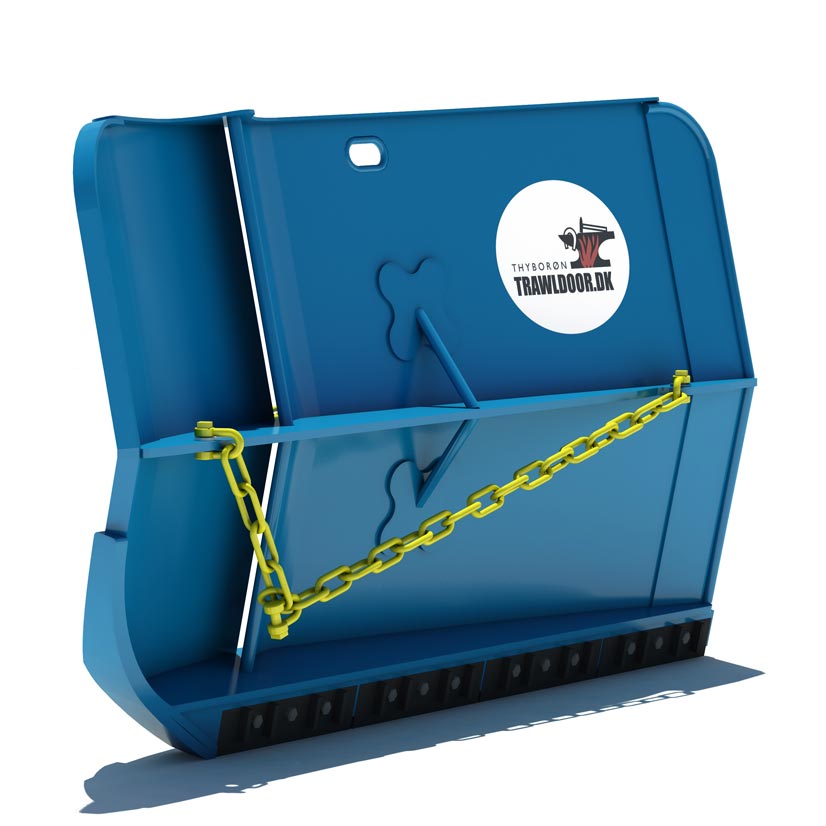 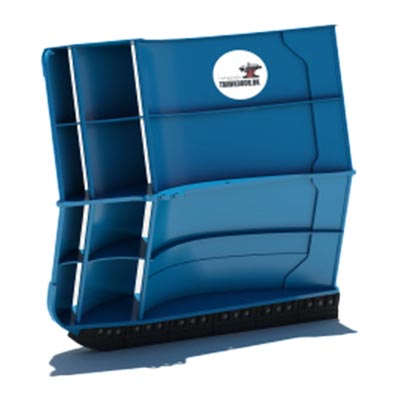 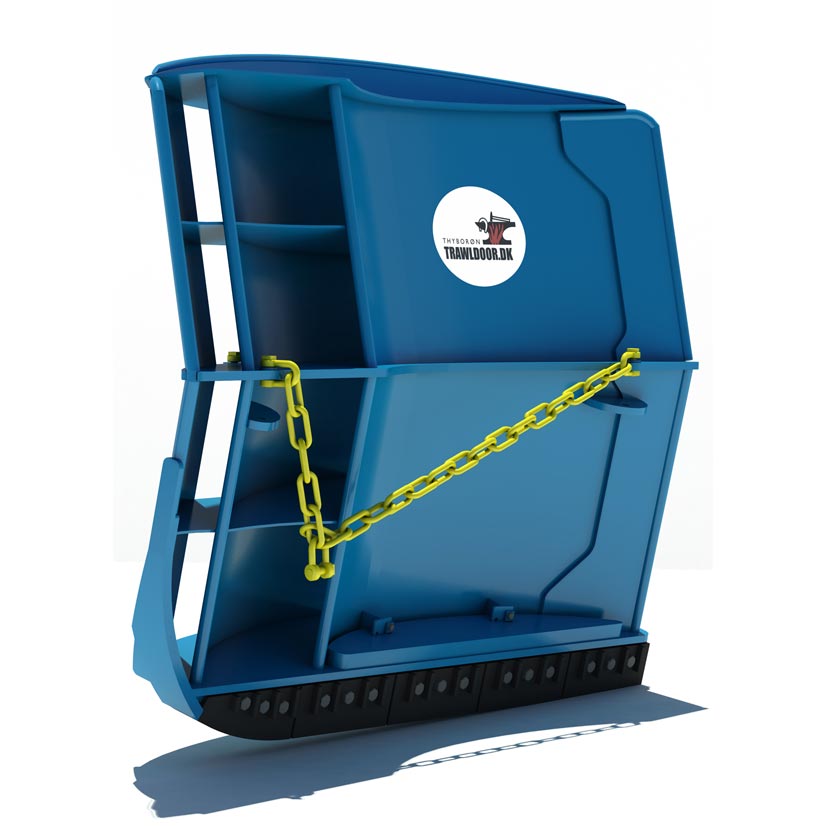 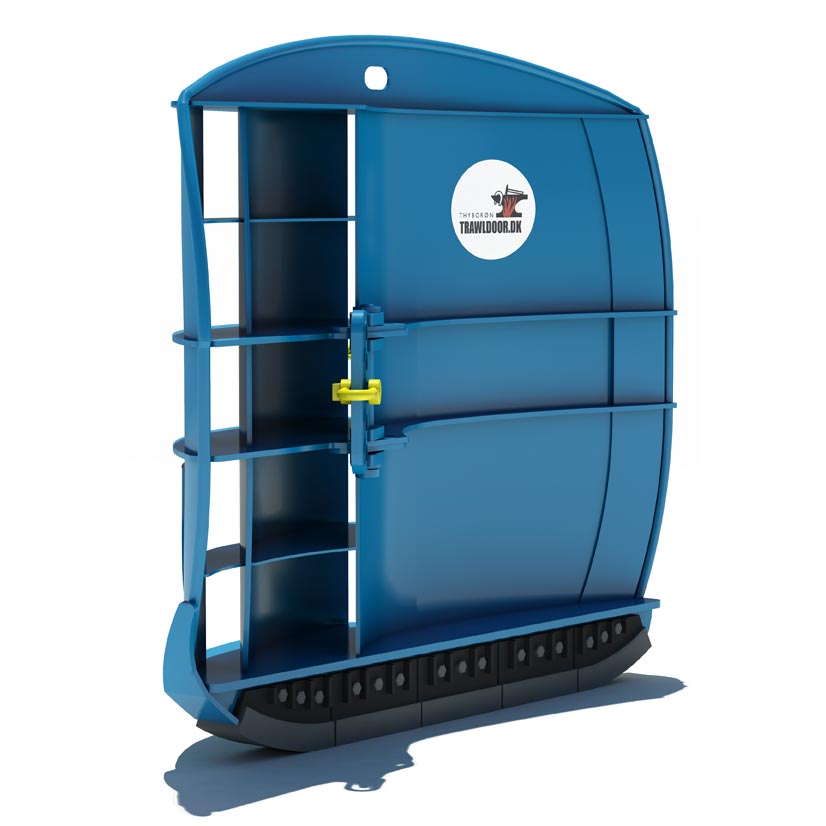 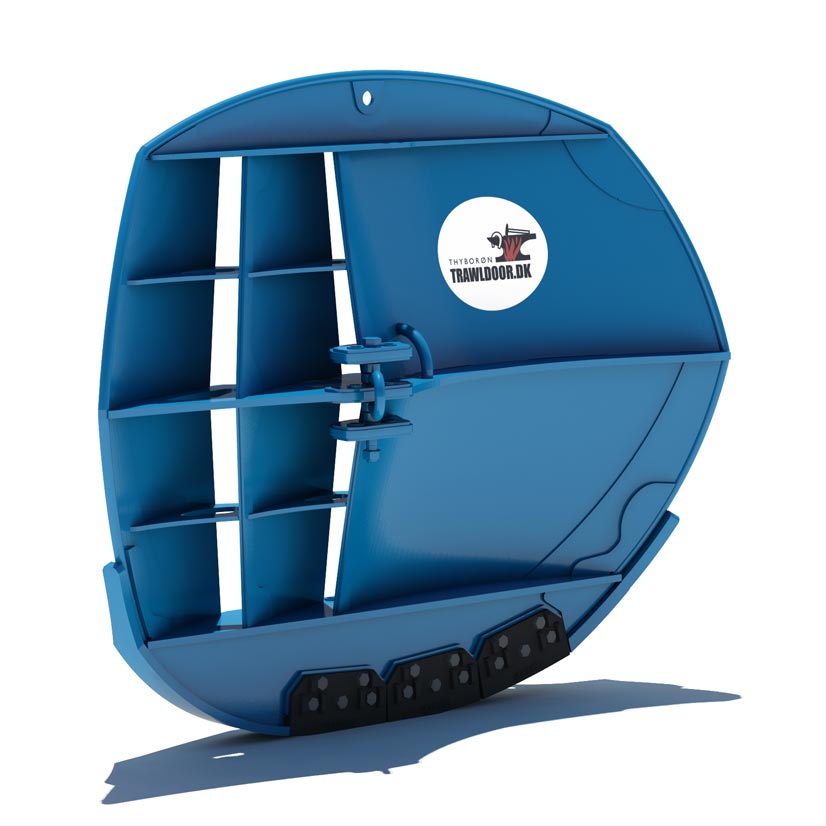 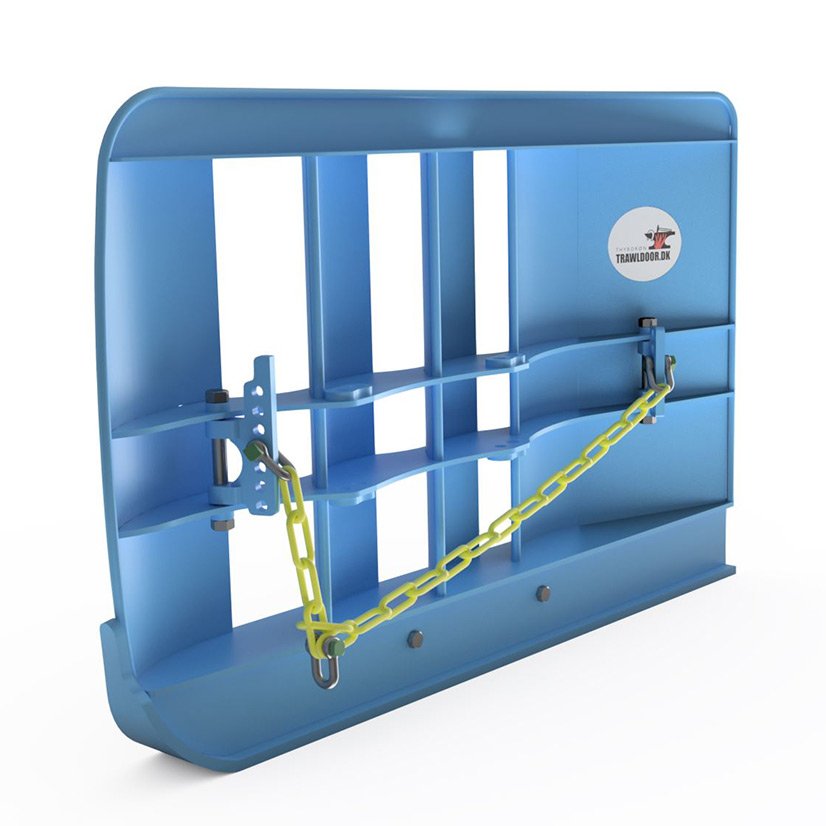 The semi-pelagic trawl doors do not run as hard in the bottom as the bottom trawl doors since they bounce softly across the seabed leaving less footprint in the trawled area. This feature combined the semi-pelagic doors being more efficient, letting the vessel cover more ground for less used fuel are the reason why this design must be considered as an eco-friendlier solution. Increasingly, more areas around the world are restricting the use of bottom trawl doors because of the negative environmental impacts to the seabed.

The semi-pelagic door takes a learning curve for the fisherman making the run smoothly, but when this is achieved the benefits are big. Imagine being capable of covering more grounds, catching more fish, having less maintenance on both doors and trawl and while all this is being a reality the vessel burns less fuel, making the whole business way more profitable.

The adjustment possibilities of the semi pelagic trawl doors are endless. They can be used hard on the bottom, bouncing softly across the bottom, or even being used flying off the bottom. All Thyboron Trawldoors semi-pelagic models can be used with 2 or 3 backstrap setup. The brackets to connect the chain / rope allows these manual steerable trawl doors to behave as the fisherman wants, which gives a huge advantage for the fisherman when catching curtain species in difficult areas.

We always customize the semi-pelagic trawl doors to fit curtain areas or fishing methods with regards to center of gravity and build quality. They can be made in high performance steel plates or steel certified for shipbuilding. 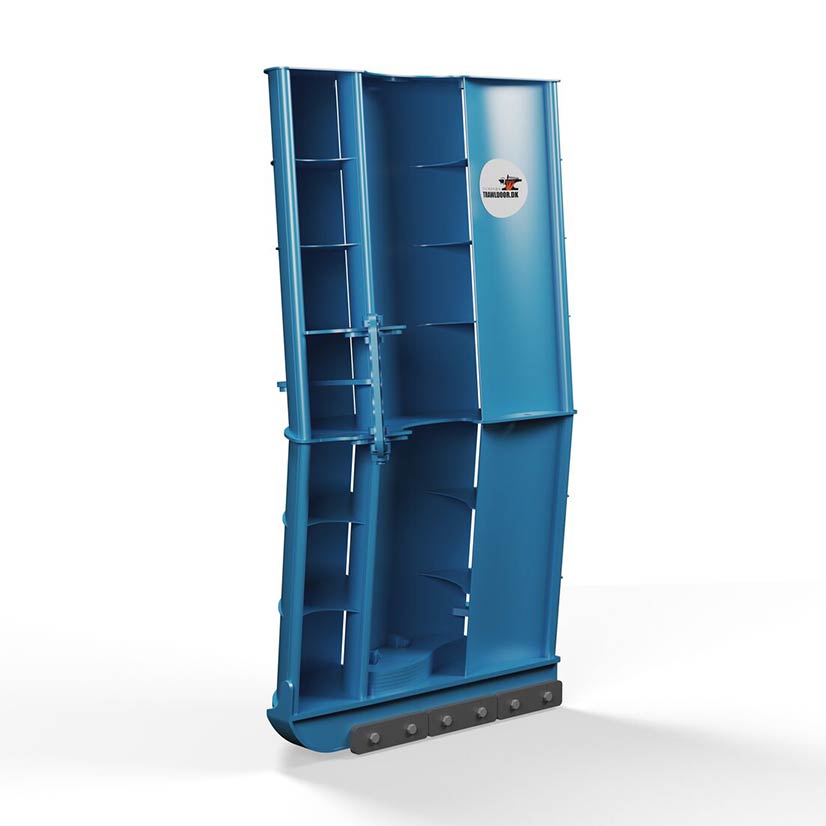 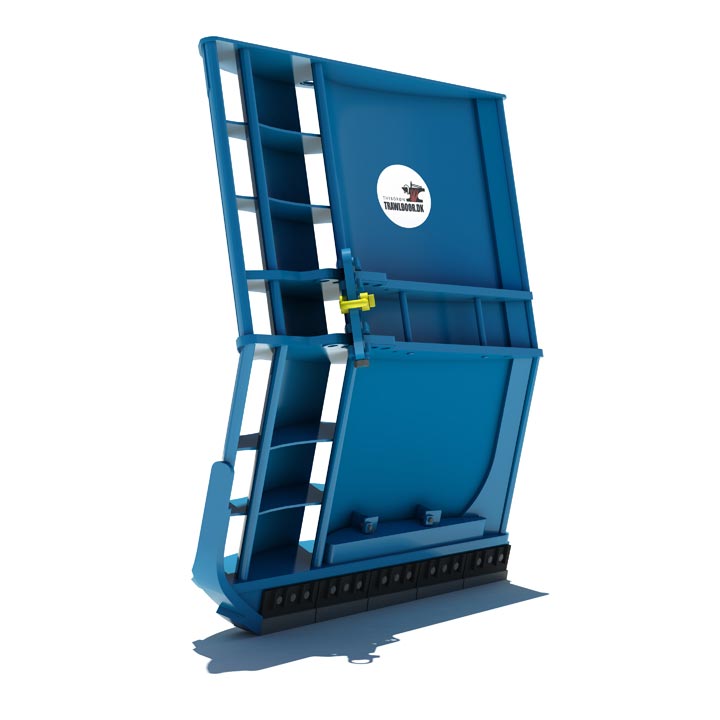 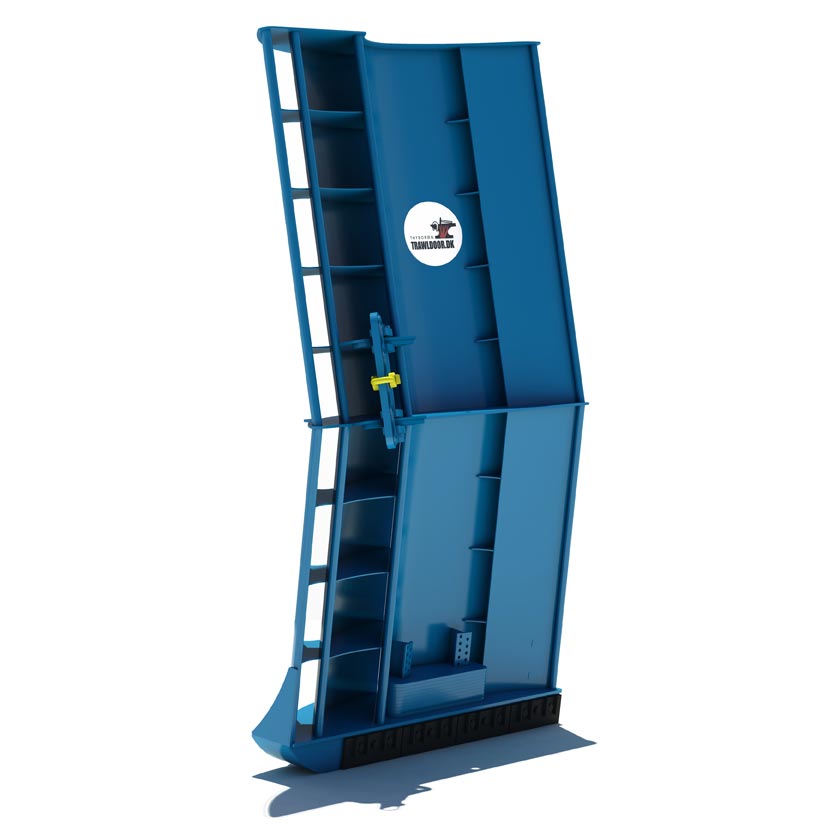 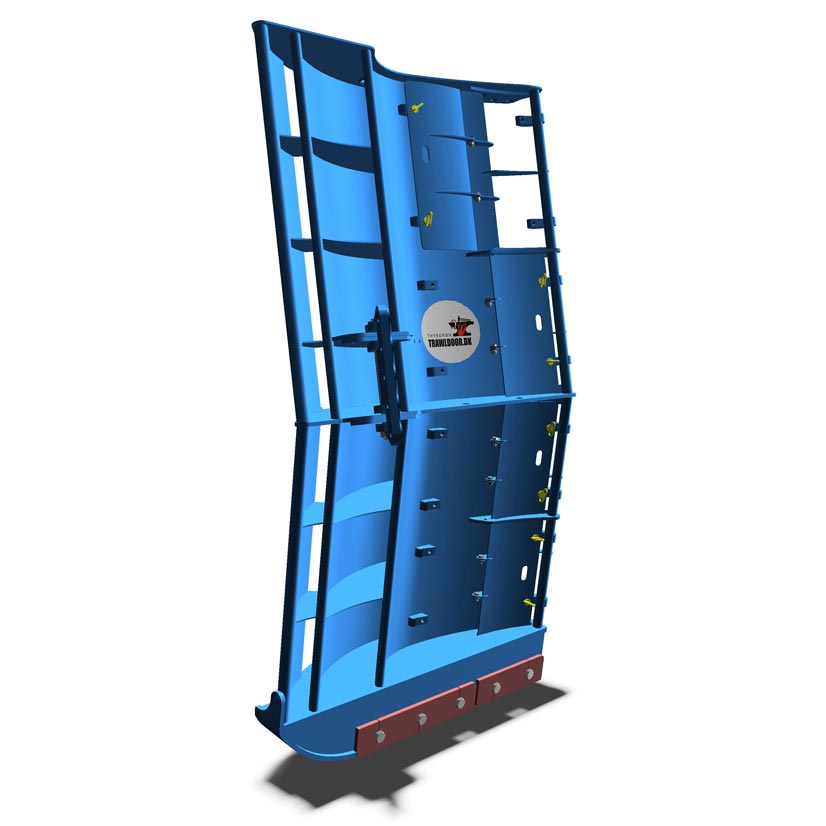 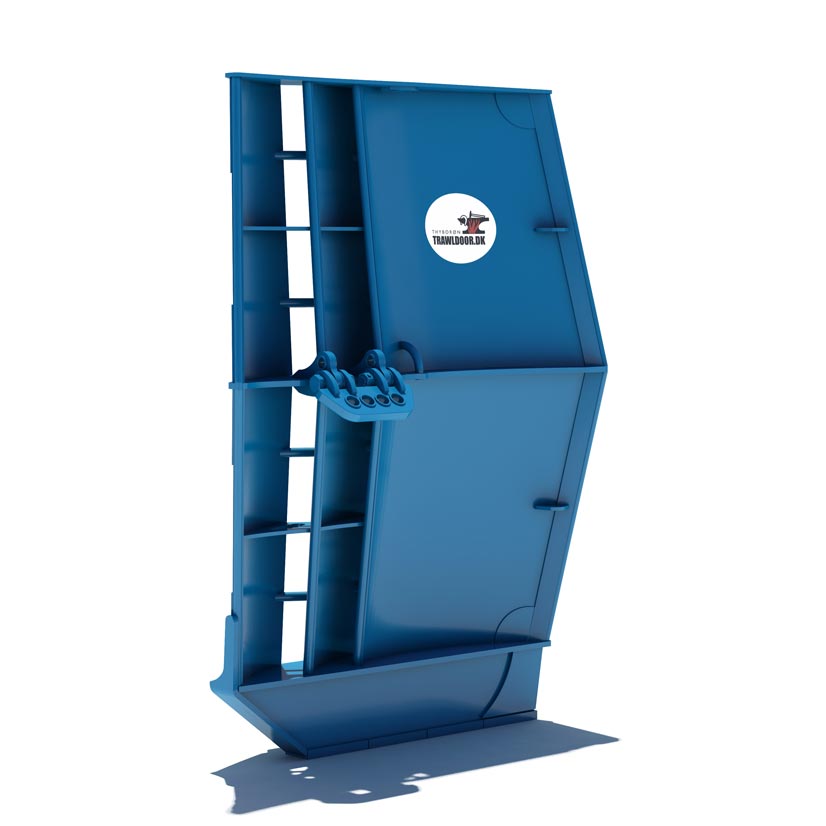 Pelagic trawl doors are used to catch pelagic species. They are being towed behind the vessel as bottom trawl doors, but they are flying in the water and do not have direct contact with the seabed.

In modern fishing industry the pelagic trawl doors are becoming more popular. Back in time they where only used to catch pelagic species but now they are also used to catch species that lives on the bottom or close to the bottom and it is done with the doors “flying off” the seabed.

The high aspect and all-around pelagic trawl doors are highly efficient and up to twice as powerful as a regular bottom door design. They are mostly used to catch species like mackerel, horse mackerel, herring, blue whiting, sprats, sand eel, sardines, pollock and hake. The pelagic trawl doors can spread massive trawls with wide openings. In some fisheries we see as much as 500 meters between the trawl doors.

The construction of a pelagic trawl door from Thyboron trawldoor is well known by its high aspect ratio and deep curved foils. Our models TYPE 15VF and TYPE 22 BLUESTREAM are used in fisheries all over the world.

For years we have been trying to develop the perfect pelagic trawl door, ensuring the fisherman the design with most possible spreading power for as low drag resistance as possible and we have succeeded. The TYPE 22 and TYPE 32 BLUESTREAM does exactly that. All this, while keeping the steadiness and stability when maneuvering intact, taking all the good things from previous models and combinate it with the new and more efficient designs and technologies.

We are currently working on a solution that will make these designs controllable, so that it will be possible to steer the trawl doors from the bridge with a computer program. Moving the trawl doors up and down in the water while towing, controlling positioning and spread whether facing tide or other obstacles will be the next big thing from Thyboron Trawldoor. 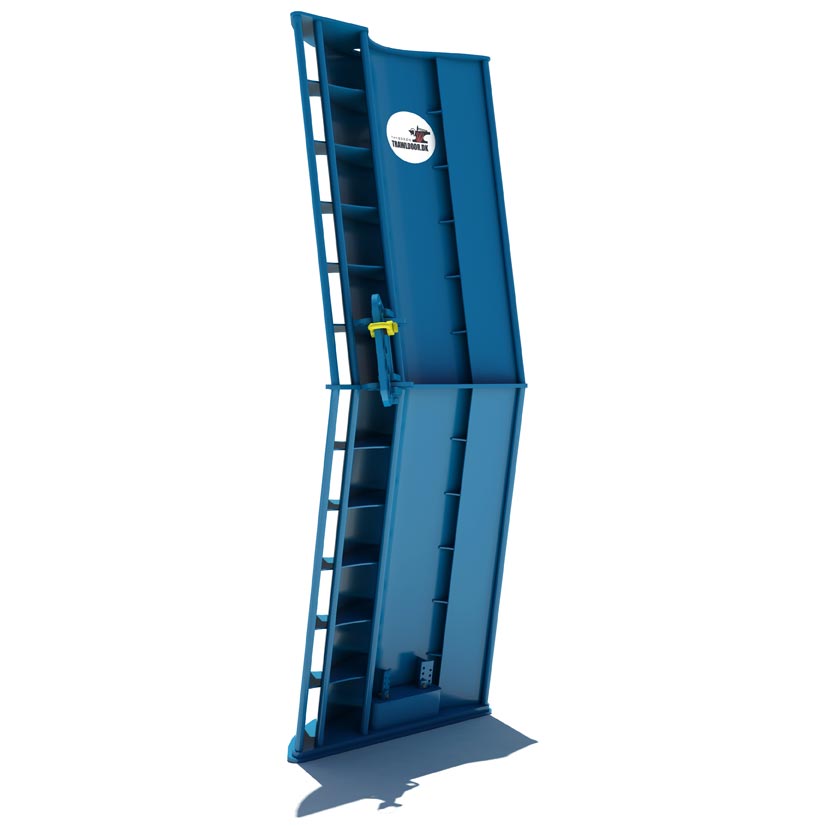 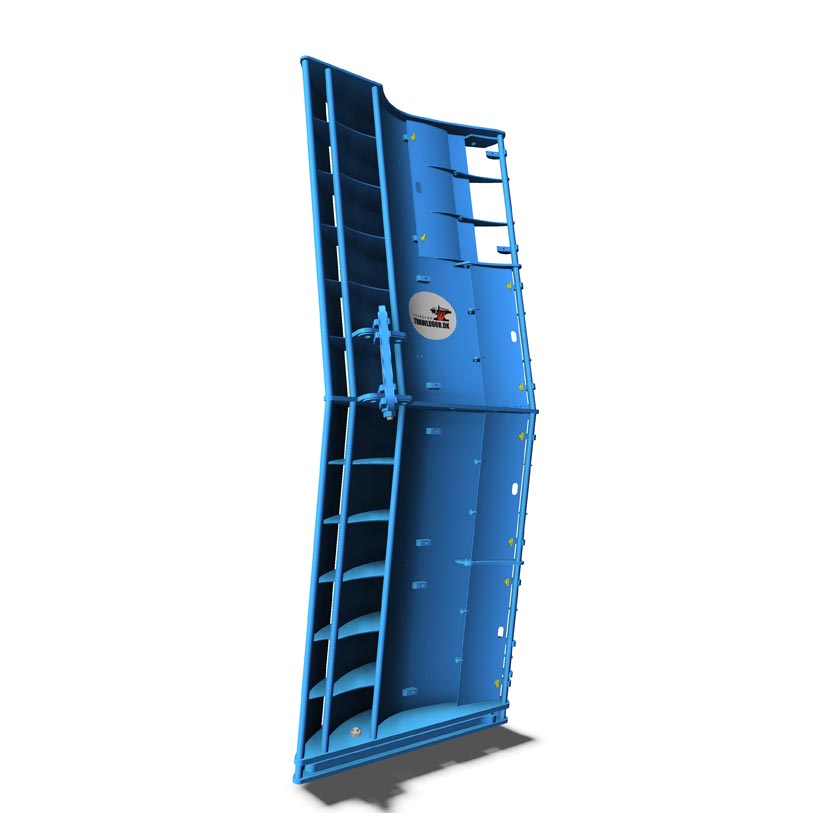 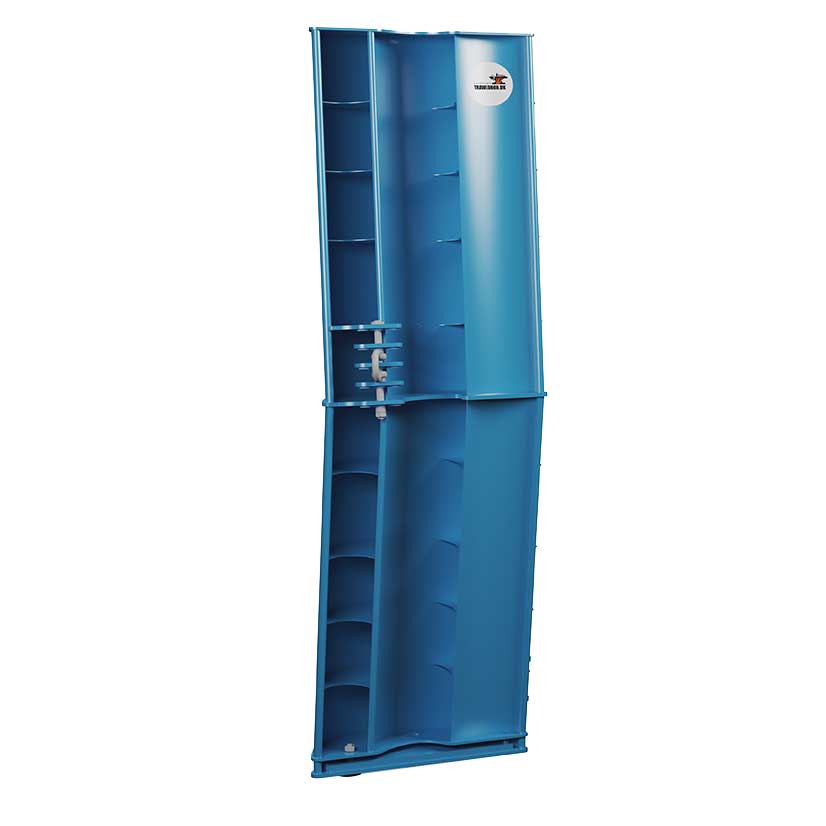 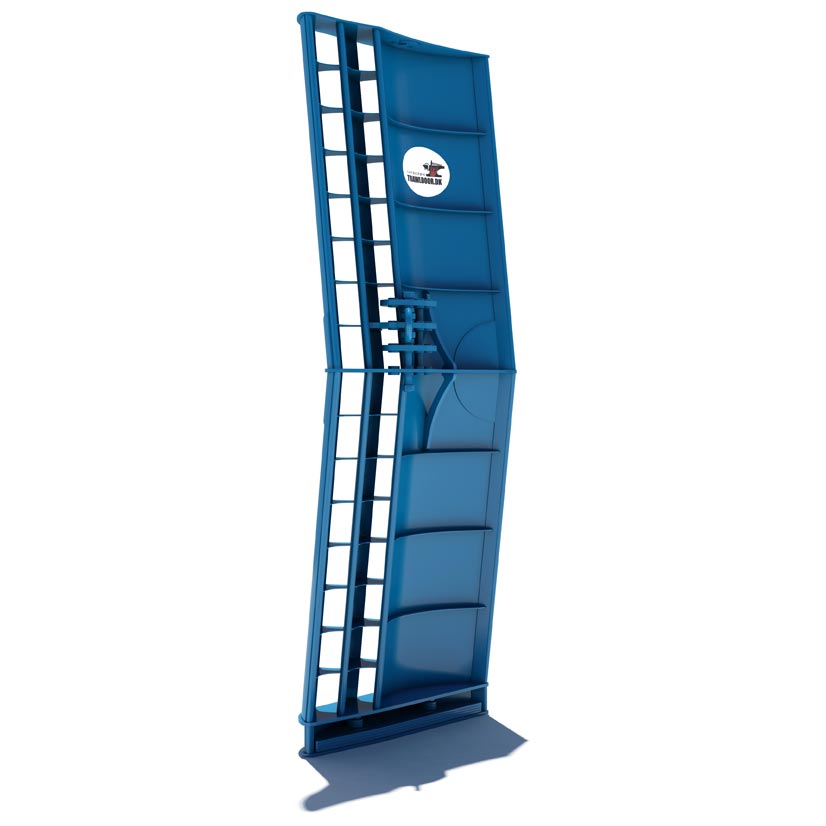 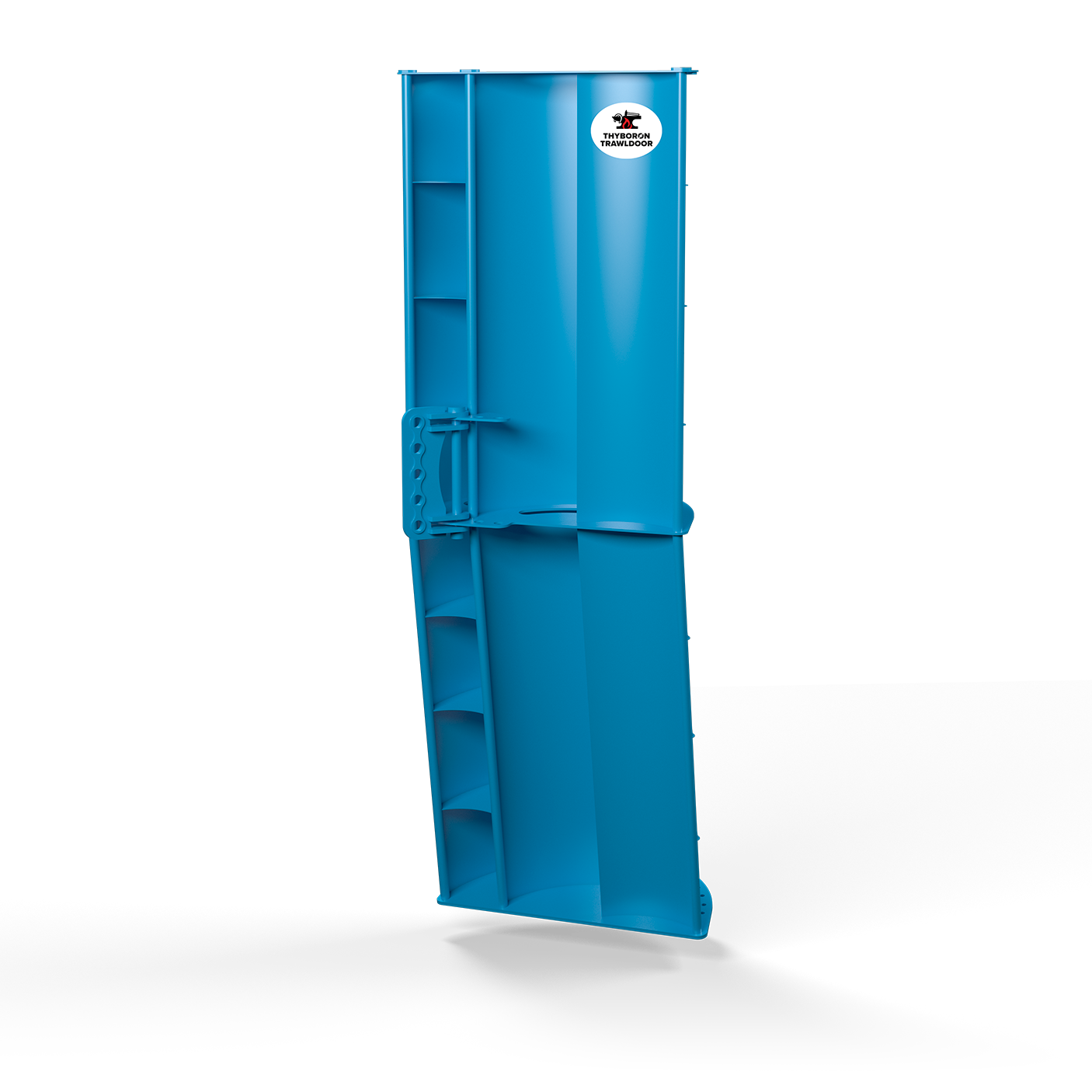 Clear benefits of our steerable and controllable trawl doors

When the controllable setup have finalized tests and performed satisfyingly within our requirements in different circumstances it will be commercialized.

BLUESTREAM technology is integrated in the new Thyboron Trawldoor models.

Spreading power and drag resistance of trawls doors can be measured operationally in a flume tank. To calculate the lift and drag ratios (CL-Lift Coefficient and CD-Drag Coefficient) trawl doors are tested at multiple angles of attack. The optimal angle of attack is the most efficient angle where CL is highest, and the CD is lowest.
As part of the trawl door designing and testing protocol once a door has been tested in a flume tank a full-scale model is built and tested at sea on a fishing vessel.

We have manufactured trawl doors for many years and for many fishing boats. All that experience is gathered and put in to our trawl doors and we set pride in what we do. Do not hesitate to reach out to us with any questions you might have. Or better yet, we will put you in touch with fishermen like you self, and they will tell you about Thyboron Trawldoors.

The BLUESTREAM trawl doors are a totally versatile high aspect trawl door. These doors can be used for all kinds of fishing set-ups including bottom fishing, semi-pelagic fishing “flying doors off the bottom” and direct pelagic fishing.

We are supplying trawl doors to the fishing industry in more than 50 countries around the globe. Bottom fishing, demersal fishing, single rig, twin rig, quad rig and all the way up to vessels using 6 sets of trawl doors and 12 trawls. Semi-pelagic fishing. Pelagic fishing and so on. No customer is too big for Thyboron, and no customer are too small for Thyboron Trawldoor.