On the harbor front of Thyboron, one of the largest fishing ports in Denmark, you will find an old building with the name “Thyborøn Skibssmedie” on the main wall.

It looks very modest, but looks can be deceiving. Behind these walls you will find the world’s leading manufacturer within a special niche of the fishing industry; Design and production of trawl doors.

A trawl door is a custom-made steel construction which is towed through the water in front of a fish catching trawl. The trawl doors are made in sizes from 1m2 and up to 25m2 with weights from 100 and up to 8.000kg. The electronic development within fisheries worldwide have improved the demands of the suppliers of fishing gear.

Thyborøn Skibssmedie A/S was founded in 1967 by master smith Børge Stausholm Andreasen. Since 1967 the company has specialized in manufacturing trawl doors.

Thyboron Trawldoor is the world’s leading manufacturer of trawl doors servicing all aspects of the fishing industry including bottom-trawling, semi-pelagic and pelagic trawling.

Product development takes place in a close co-operation with fishermen and international experts and is tested in specialized flume tanks around the world. Our product development strategy combined with more than 50 years of experience in manufacturing trawl doors, means we can confidently supply a complete range of efficient trawl doors to meet the specialized needs of any fishery in any ocean environment.

“Made in Denmark” is the quality sign of our products that is made in the factory which is proudly located at the harbor front of Thyborøn, Denmark.

Thyborøn Trawldoors are manufactured by a very experienced, well-educated staff and always in first class materials with a certificate. The combination of the staff’s experience, the best technical equipment and accomplished working procedures are giving a uniform production. The result of this is high-quality products with a minimum of mistakes.

The flexibility in the production and among the staff allows Thyborøn Trawldoor A/S to offer “tailor-made” trawl doors, which are built to the individual customer needs, wishes and demands.

It all began in the 60’s with the simple v-shaped trawl door called TYPE 1, in cooperation with fishermen we soon developed the original V-shape of TYPE 1 and made it with 1 foil and called this design TYPE 2. TYPE 2 was made in close cooperation with danish fishermen Erik and Orla Kjeldsen. TYPE 2 became the start of Thyboron Trawldoors export journey. In the late 70’s Thyboron was represented in fisheries both within and outside European borders.

Thyboron Trawldoor continued its growth through the 80’s and 90’s and as the worldwide fishing industry develops and improves the fishing gear, Thyboron Trawldoor adapts. Using fishing method experts, flume tank specialists and fishermen around the world, Thyboron aimed to have the most efficient trawl doors for any given fishing setup either demersal or pelagic.

Introducing the otterboard TYPE 4 in 2000 and with the improved TYPE 11 in 2003 Thyboron Trawldoor took bottom trawling to the next level of efficiency. Offering fishermen, a bottom which was up to 30% more efficient than the TYPE 2 they were already using.

Today in 2021 the TYPE 11 is still one of the most commonly used trawl doors for bottom fishing and stands high on the selling list among trawl doors manufactured by Thyboron Trawldoor. 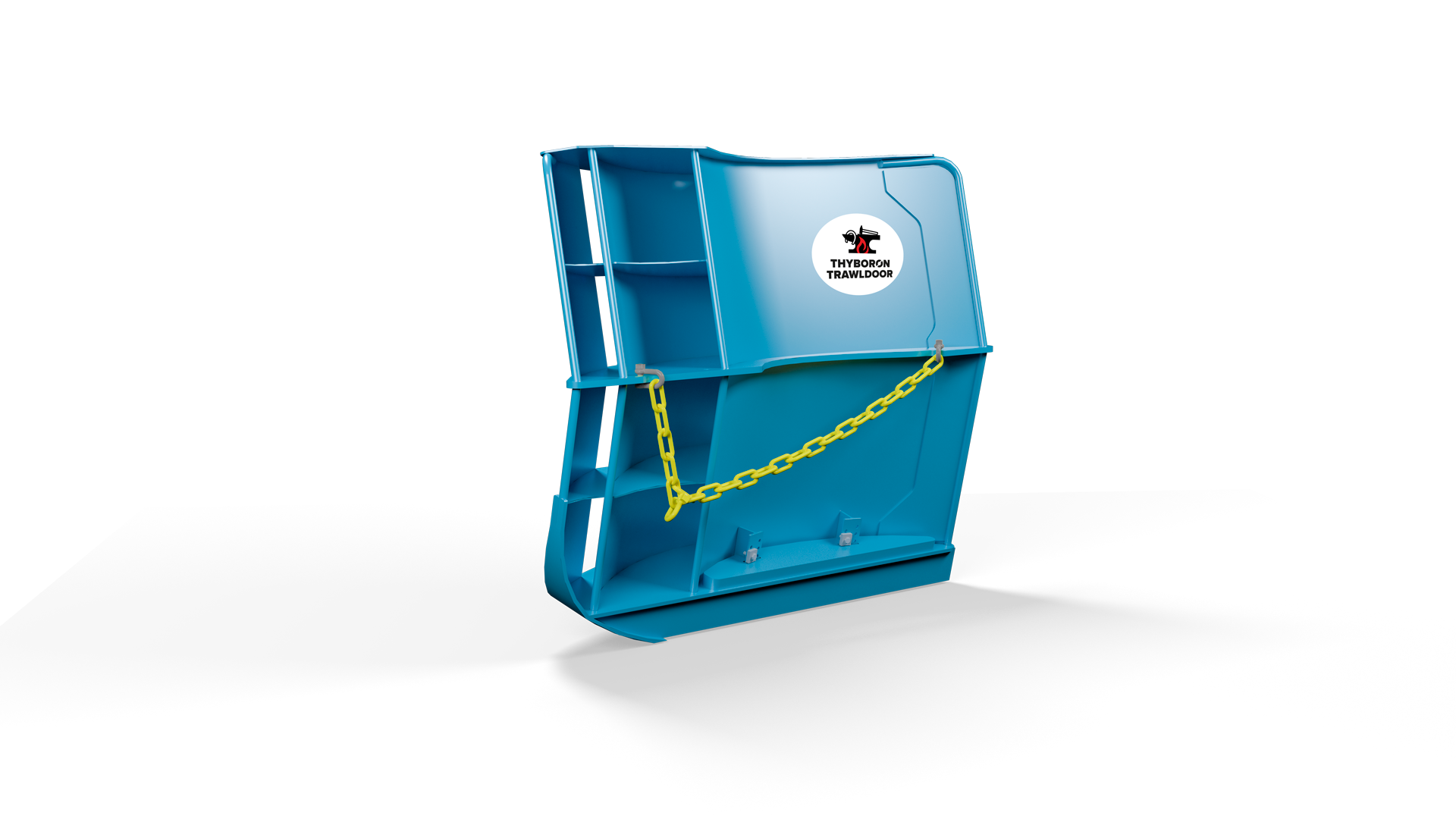 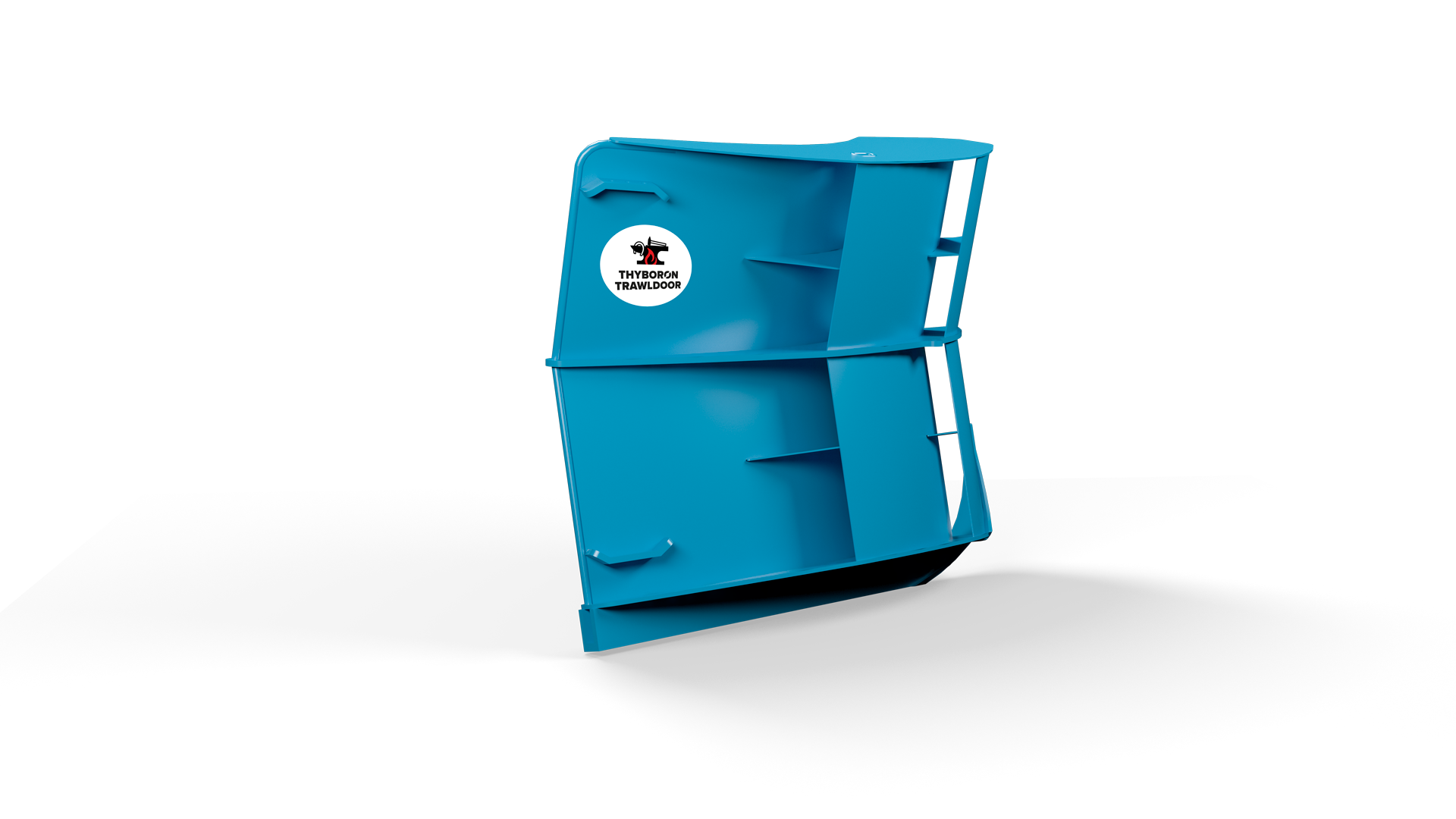 When taking a walk down memory lane and talking about trawl doors, our semi-pelagic design TYPE 14 must be mentioned. The Type 14 VF design is the most sold semi-pelagic trawl door in the history of Thyboron Trawldoor. The TYPE 14VF is an all-around high aspect design that is used in both bottom trawling and pelagic trawling. TYPE 14 was the first high aspect door to prove itself world-wide in bottom fishing. The results and feedback keep being promising.

TYPE 14VF is being used by fishermen all over the world. From shrimp fishing with multiple trawls in the Barents Sea to the deep waters surrounding New Zealand.

The aerodynamic design of TYPE 14VF makes it much more efficient than a regular bottom door. The TYPE 14VF performs at different towing speeds and at various depths.

The reference list for users of TYPE 14VF trawldoors are among the biggest within THYBORON TRAWLDOORs, but worth mentioning is that the top catchers in the Barents Sea shrimp fishing are using TYPE 14VF trawl doors and roller clumps from Thyboron. State-of-the-art factory trawlers like HAVFISKE’s KONGSFJORD, GADUS POSEIDON, GADUS NEPTUN, GADUS NJORD, RAMOEN, HOLMØY and many others are all among the users.

The first real breakthrough with highly efficient pelagic trawl doors was done in 1997 with TYPE 8. These doors were designed in cooperation with John Bach “John the Dane” who was eager to run the doors off the bottom while having less resistance.

Fuel efficiency has for many years been a commonly used term when searching or buying new fishing gear. When we see increasing oil prices it affects the prices for the fuel burned by the vessels so using as less fuel as possible pr. Kilo fish caught is of every fishermen’s finest interest.

In 2017 our patented BLUESTREAM technology was invented by Thyboron trawldoor, after several years of collaboration with experts from the SINTEF Flume tank and a team of international fisherman and net makers.

The BLUESTREAM technology has enhanced the efficiency of a standard trawl door by incorporating a double foil into the design. As a trawl is towed through the water, the double foiling increases the speed of the water flow pushed through the foils resulting in greater lift and reduced drag.

The increased hydrodynamic efficiency from the double foiling can be observed in both pelagic and bottom fishing.

The BLUESTREAM technology is the key feature of the new trawl doors by Thyboron Trawldoor. By developing a door with a more fluent and efficient water flow Thyboron Trawldoor has succeeded in bringing this revolutionary invention to the world’s fishermen. The concept is simple- a door that creates greater spread with less resistance.

The BLUESTREAM trawl doors are a totally versatile high aspect trawl door.  These doors can be used for all kinds of fishing set-ups including bottom fishing, semi-pelagic fishing “flying doors off the bottom” and direct pelagic fishing.

We are supplying trawl doors to the fishing industry in more than 50 countries around the globe. Bottom fishing, demersal fishing, single rig, twin rig, quad rig and all the way up to vessels using 6 sets of trawl doors and 12 trawls. Semi-pelagic fishing. Pelagic fishing and so on.  No customer is too big for Thyboron and no customers are too small for Thyboron Trawldoor.

High service and quality are a matter of course and never an exception.